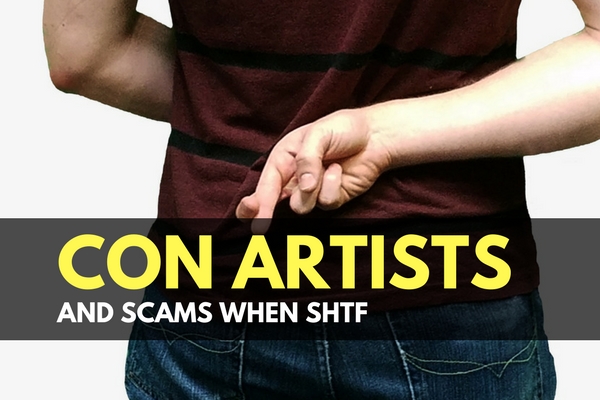 The Wild West was a playground for con artists and scammers. SHTF scenarios displace many scared, vulnerable people allowing for a resurgence in scams. Con artists will be like wolves in the middle of a herd of sheep, easily swindling bewildered people out of money and other resources. While online scams may still exist, the majority of the tricks will take place face-to-face as they did in the 1800s. Confidence tricks (Cons) are varied, but they all involve interactions. When you are dealing with people and trading goods during a disaster or SHTF, keep your head on your shoulders and be naturally suspicious.

A List of Cons and Scams Probable for TEOTWAWKI

Some scams will be more prevalent than others given the dire situation most people will be in. We picked out a few of the more common tricks con artists would use to separate people from their resources:

Examples in History of Scammers

History is littered with examples of people taking advantage of others during and after disasters. Many of these scams occurred during wartime which can make people impulsive and lean towards groupthink. Tumultuous times make it hard for rules and laws to be enforced, and criminals can take advantage of the chaos. Here are a few examples:

Becoming a Scammer When SHTF

A few individuals and groups may relish the collapse of law and order. If you are planning on joining these ranks during a disaster, emergency, or when SHTF- I urge you to reconsider. The same absence of laws that allow scammers and con artists to run rampant also will affect the punishments afforded to those that are caught. Those that got caught stacking decks in the Wild West weren’t put on probation- they were shot. Besides the moral implications of stepping on others to increase your situation in life, know that the consequences of immoral behavior will be much more grave without the protection of the law.

Con artists and scammers are just a few types of criminals that will flourish when there are disasters and civil unrest. An increase in theft and harder crimes is also very likely. Compassion and caring for others is a great way to approach emergencies and disasters, but that should not keep you from being careful. Be smart about trust and who you deal with during trying times.  Keep exploring, stay prepared, and be safe. 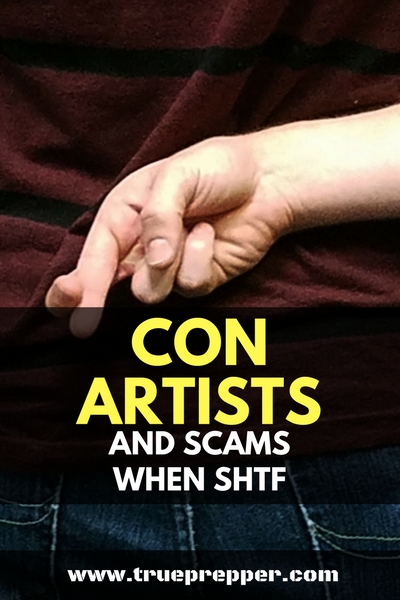 One thought on “Con Artists and Scams When SHTF”