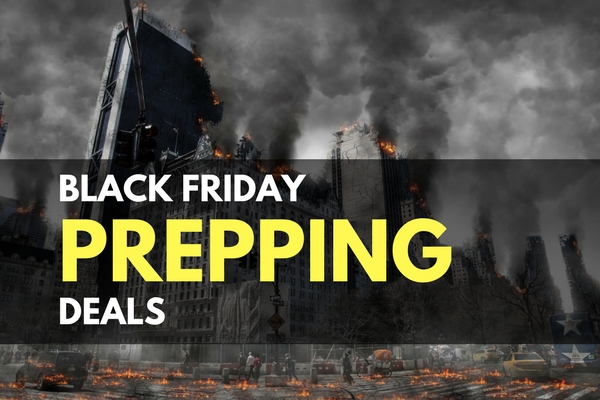 Black Friday has become one of the best times of the year to buy stuff. “Doorbusters” lure us in to kick start their holiday shopping. Prepping supplies are no exception. You can find all sorts of survival gear on sale during Black Friday. The downside of all this is obviously the traffic and the in-store ‘mobs’. I don’t particularly care to get caught up with any of that mess, and online deals have spread out past the traditional Cyber Monday- even into Black Friday itself.

If you do feel the need to go out into the insane crowds, we urge you to shop local and find good deals from the little guys. The crowds should be less, the deals just as good, and the money stays in your hometown. We scanned over all of the best survival and prepping finds and listed them out below. So if you are making a wish list or have a few preppers to buy some Christmas presents for- check them out below!

If getting pushed around in mobs and fighting over electronics sounds like your cup of tea, stop at a Walmart at about 6pm on Thanksgiving to join the melee. Otherwise, stick to online shopping or better yet- hanging out with your family.

Walmart tends to ‘slow roll’ its Black Friday ads to add suspense. I guess it works, because Walmart is typically known for being a madhouse the day after Thanksgiving. This year is different. Their ad was just released and they are open late on Thanksgiving day- getting it started before Black Friday is actually here. Most of the buzz this year is their $150 sale for the Xbox One S. To accompany that, they have amazingly cheap TVs that are sure to be door busters again.

They have local and regional deals this year too, so make sure to check your local ad when you visit.

One of the up-and-comers for Black Friday deals is the online megastore that is Amazon. They run deals for the entire Black Friday week, and then just keep going for the entire Cyber Monday week. Some of the stuff is Chinese junk- so don’t go on a spending spree without doing a little research.

I like to narrow it down by checking out the sports and outdoors category. It’s always changing based on stock and availability, so we can’t just list one good deal, but you can be sure they are out there. Camping lanterns, LED flashlights, backpacking packs, and gun holsters are a few of the deals I’ve found in the past. Check out their deals and countdown here:

Field Supply lists great deals throughout the year, and is often featured in our daily deal hunts. They have all sorts of stuff, ranging from clothes to survival food buckets

They buy gear in huge bulk and sell it at the best prices passing along the savings. But this year they have really stepped up the ante for Black Friday.

Capping our Black Friday finds is Legacy Food Storage. They are running a sale November 22 – December 1 with $200 (44%) off their meat combo bucket.

They are giving away some freebies away, depending on how many buckets you buy. I’m not sure why- they always sell out every year pretty quickly.

Since the bucket deals are limited supply, make sure you grab one early.

Finding good deals for Black Friday or Cyber Monday can be fun and rewarding, but don’t lose track of the reason we are celebrating in the first place. Coming together with your family should come first, if you are fortunate enough to have them around.

Be sure to also check out our round up of the Cyber Monday exclusive prepping deals.

Let us know in the comments if you know of any other great deals we may have missed. Keep exploring, stay prepared, and be safe.

You’ve Been Missing Out

Join 17,466 preppers getting no-spin prepping advice by subscribing to TruePrepper. Thanks for reading, and welcome to the club.