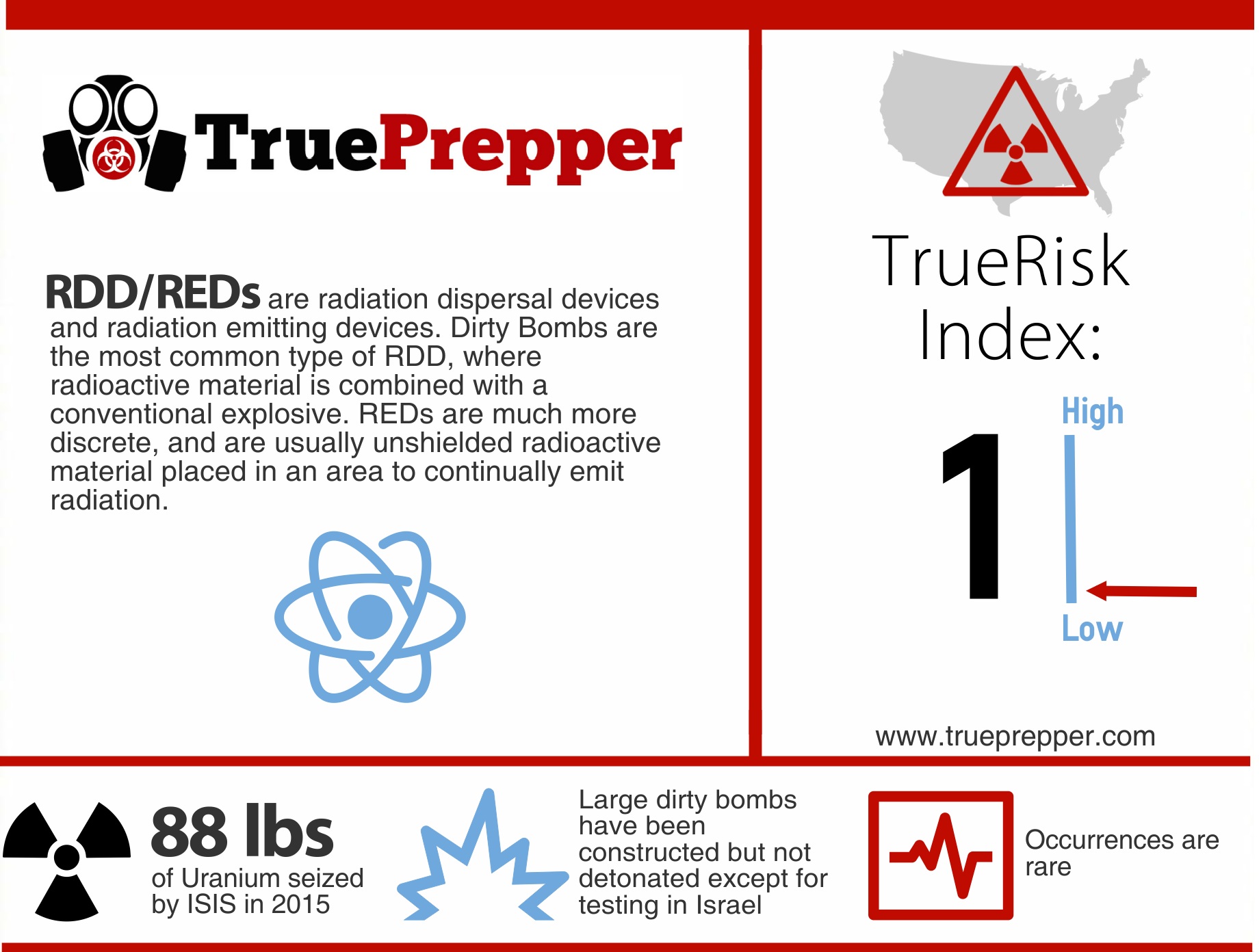 About Radiological Dispersal and Emitting Devices

RDDs and REDs are similar enough to categorize together, but are very different threats.

Severity of a RDD/RED Attack

While both devices are lethal weapons, they are not as severe as others due to their limited size and effectiveness. The instantly lethal portion of an RDD is the release mechanism- usually an explosive. The remaining radiation exposure can be treated medically and prevented by staying away from the affected area. An RED, while difficult to detect, does not pose any instant threat and requires multiple exposures or prolonged exposure to do significant bodily harm. While the radiation exposure can kill, there is also the possibility that radiation sickness symptoms will develop before a lethal dose of radiation is received, which will allow the victim to get away from the device. Neither device can affect a large area, region, or entire country which makes them have a limited severity. The major implications of an RDD or RED attack would be the surprise factor, and the elevated fear factor of a radiation release.

No. As mentioned before when taking a look at the severity, an RDD or RED has a limited scope and range. While the terror aspect of an attack can send shockwaves through a community, it will not be enough to cause destabilization of society.

A RDD and RED risk calculates out to a 1 on the TrueRisk index. Although there is still a risk, this is one of the lowest calculated risks on the index- below all of the others listed at 1. The reason the RDD and RED risk is so small is due to several factors:

Your specific RED risk is based largely on your standing in your community and your job type. Public figures and government/military officials are at a slightly higher risk. RDD dirty bomb risk is tied to urban areas and military installations. If you are located in one of those two areas, your risk is slightly elevated for an RDD attack.

The nature of RDDs and REDs make them meant to catch you off guard. Planning for incidents and specialized kits are some of the more important preps for dealing with these threats.

Identifying whether or not an incident involves radiation is the difficult task. The Boston Marathon bombing was feared to have been a dirty bomb for a period of time after the attack, which slowed the overall response to the incident. Radiation protection and detection equipment really comes in handy for these types of attacks.

The basic bug in or bug out plans work well for RED/RDD incidents. They cannot threaten more than a region at a time, and are easily mitigated once identified.

During a RDD or RED Attack

As mentioned before, identifying the actual attack, isotope type, and radiation exposure is most of the battle. Whether you are staying informed with communication equipment, or have your own radiation detection equipment- knowing your threat is the most important part of staying safe from and RDD/RED. If you are unsure of the impact of an event, it is safest to wear your protective equipment and keep it on until you are certain there is not threat of radiation exposure.

After a RDD or RED Attack

A RDD or RED incident is pretty easy to ‘clean up’ unless it was a dirty bomb detonation. You just need to shield and remove the radioactive isotope from any vulnerable area. If it was dirty bomb was used, the area will likely be cordoned off and not accessible for a long period of time due to the isotope dispersal. Radiation will continue to be present at the location of the blast long into the future.

TruePrepper Articles on RDDs and REDs