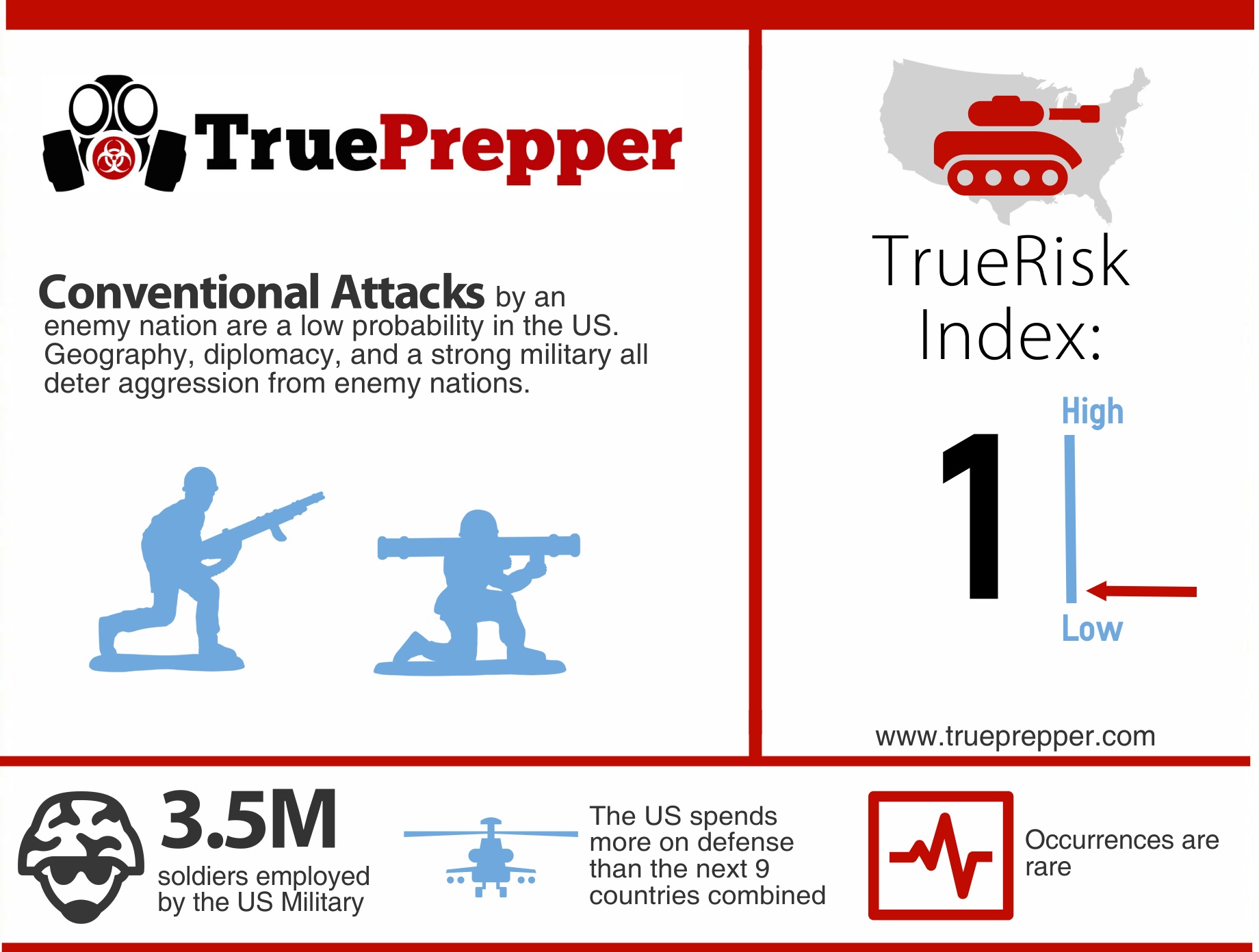 A conventional attack, for our risk analysis purposes, is considered a state-sponsored attack on the American homefront. In most cases this would be a declaration of war using conventional weapons (instead of a nuclear war). Obviously we have had this occur in the past many times, with the last being Pearl Harbor in World War II. We also factored in the popular conspiracy theory of the government turning on its people and attacking them. While highly unlikely in any event, it is still safe to say that nothing is impossible. There have been six wars on US soil, or at places that would become the US throughout history:

History shows that war is always a distinct possibility despite the advances the US has shown in the security of the nation. American diplomacy is constantly changing and our stance in the world is constantly evolving, but the bottom line is that the threat of a conventional attack to America has grown smaller and smaller.

Severity of a Conventional Attack

As history shows, a war would prove to be bloody and brutal. Over a million people have died throughout wars, just on the American side. The stakes have only grown as conventional weapons have become more efficient killing machines. Any war that is kicked off on the homefront would have extremely severe consequences and cause a large number of casualties.

Yes. An invasion on home soil would change the world as all Americans know it and alter the course of our future forever. For another nation to have the audacity to challenge the US would mean they believe there is a chance to win. This means that they know something that we do not, or that our situation has been drastically changed. A conventional attack is just a 1 on the TrueRisk index. As a reminder, the TrueRisk index is scaled based on threats to the United States, as this risk can be much higher for many other countries. If you live outside of the US or just prefer to assess your own risk levels, we encourage it by all means. Why is a conventional attack just a 1? There are three key reasons as to why risk of invasion on US soil is so low:

Preparing for war as a non-combatant can be confusing and scary at the same time. While self defense and security will be at a premium, note that supply chains and infrastructure is often targeted as well.

Your survival kit should be more than ready to help you survive any loss in your resource supply chain. Pair that with a bug out bag “just in case” and you should be good to go. Make sure your survival kit has plenty of security provisions.

You will need to stay flexible with your planning, so creating specialized plans is not advised. The generic bug out/bug in plans should suffice in the event of a conventional attack.

During a Conventional Attac

First things first- you will want to disengage from any area near any front line. Communication is always the key to knowing what is going on, where the enemy is, and how to escape. American forces will likely be evacuating cities under duress, and you need to be ready to leave with little notice. If you are not near the foray, you still need to stay updated using whatever communications means is available.

After a Conventional Attack

When the war or attack is over, you will be able to return home only when the military deems it safe and accessible. Stay informed and vigilant- strife and skirmishes are still possible and very much a threat. Rebuilding your life will be difficult and there will be many challenges. Be wary of ‘carpetbaggers’ that will come to take advantage of everyone in weaker bargaining positions. Stay positive, remember your priorities, and be thankful that you survived what will likely go in history books as World War III.